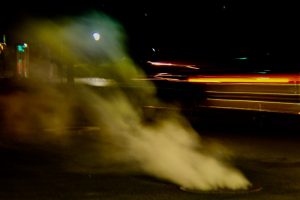 In each room was also placed a flaming piece of paper- same size. Door shut.

The first room evolved into flame. An expansion. Assimilation.

The second room, the same. Smoke billowing, breathing, filling itself in to darker shades of grey, becoming black.

A confirmation of hypothesis.

An epidemic that has come to acquire the blame for death of thousands of millennial-era firefighters and triggered a complete safety policy overhaul throughout the industry. Firefighters are quite literally re-learning how to enter burning buildings.

The amount of time a firefighter has to enter a burning building before a support beam collapses is less than a firefighter 30 years ago.

What I believe to be the innocent and inevitable gravitation towards quickness and ease. The unintended consequence being, perhaps, the combustibility of a structure.

I believe what we are experiencing is the eutrophication of society. For those less familiar: eutrophication is the phenomenon responsible for the demise of life in Lake Champlain. In this instance, a combination of concrete roadways (quickness)and farm runoff (ease) has led to an excess of nutrients in the lake, causing a dense plant bloom on the surface, but a suffocation of life throughout the layers below.

An asphyxiation of the ecosystem.

A reflexive urgency towards quickness and ease.

Mahogany to Ikea.
Lightness, mobility.
Pliability. The incorporation of plastic.

The unintended consequence being, perhaps, the combustibility and toxicity of a structure.