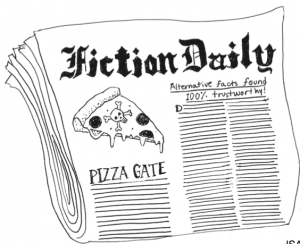 I’m not sure if anyone’s noticed yet, but the media has taken quite the beating from our president this year.  Especially those crunchy liberals who believe in science, clean water, disaster protection and other ludicrous blasphemy.

I have a message for media moguls on behalf of my generation: it is time to stop the liberal stigmatization of climate change. Climate change is not an opinion. It is not liberally slanted. It is a scary reality that puts the entire world in grave danger. And no offense to the people in power right now, but you are all going to die and leave future generations with this hot, hot mess. If 97% of all scientists agree that there is a climate change trend, you owe it to us to include the words “climate change” in your news when you are reporting on topics like extreme weather, water scarcity, and rising sea levels.

A few months ago, I had my first interview with a with a major news network. My interviewer remarked that she didn’t think I was right for the role because my environmental science background makes me biased (insert face-palm emoji here).

In 2017, I watched Puerto Rico get devastated by Hurricane Maria. I watched the US spend $306 billion dollars on damage incurred by extreme weather events. I watched the UN conclude that by 2025, 1.8 billion people will experience “absolute water scarcity.”  And I learned that of the drinking water we have left, most of it is contaminated with plastic. How did the government respond? By quietly disallowing the EPA from writing about climate change on their website, withdrawing from the Paris Climate Agreement and reviving the coal economy, and intimidating the CDC out of using the words “science-based” and “evidence-based.”

Climate change is not a partisan issue. The republicans in Florida and Texas were not exempt from the wrath of Hurricane Irma, nor could red Louisiana avoid the seven tornadoes that hit last February. Every human being needs clean air and water to survive.  No one, regardless of political affiliation, can withstand an infrastructure failure due to climate disaster. Just ask the victims of the broken levee in New Orleans during Hurricane Katrina. Trump is simultaneously silencing climate change experts and cutting funds for the rehabilitation and creation of climate protecting infrastructure. With a statistically proven perpetual increase in storm frequency and intensity, the future of America is in deep trouble.

The media is one of the most powerful tools we have as a nation. Working Americans who don’t necessarily have time to read scientific papers or complex policy literature rely on the media to simply and honestly inform them on what is going on, in part so they can make informed decisions in the voting booth.

Perhaps the remedy on climate change is a political debate, but not the injury. Climate change is one of the biggest national security threats facing millennials and we want representation in the newsroom.

I doubt climate deniers are shaking their fists at their sinks every time they go to get a drink of tap water. If you drink tap water, breathe air, or take medication when you’re sick, you believe in science. Science is based in facts, as is journalism, and climate denial is simply based in greed.

Journalists are the watch-dogs, and it is time to blow the whistle on climate injustice. Freedom of speech is what makes America great, and that doesn’t need fixing. The only thing that needs a revamp is newsroom representation.