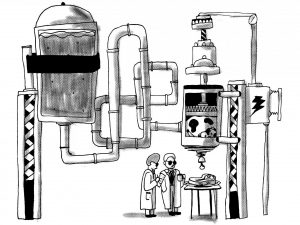 Imagine an America in which you are insecure about your source of freshwater, like so many people are around the world.

To be specific, 783 million people do not have freshwater access, according to the United Nations.

Now, imagine a world where you choose to be a responsible consumer and live a healthier, slightly richer and water secure life.

Just because today you have the ability to turn a faucet and be confident in the fact that the water is safe to drink, does not mean that luxury will always exist.

In fact, if we don’t change our ways as consumers, it most definitely will not.

The situation has grown so dire, the U.S. Office of the Director of National Intelligence now ranks water scarcity as a major threat to national security alongside terrorism, according to the news organization The Hill.

The dangers are largely underground and out of sight. They are in systems that are likely to break down or spread contaminants lead, according to the article.

The meat industry is one of the leading causes of water scarcity and a contributor to climate change. Currently, we have the luxury of walking into any grocery store and buying whatever we want, and because of this freedom we lose sight of the power behind our decisions.

The USDA reports that agriculture is responsible for 80 to 90 percent of U.S. Water Consumption.

According to People for the Ethical Treatment of Animals, an animal rights organization. It takes more than 2,400 gallons of water to produce just one pound of meat, but it takes just 25 gallons to grow one pound of wheat. Nearly half of all the water used in the U.S. goes to raising animals for food.

We are completely disconnected from the impacts of our choices. With water scarcity on the perpetual rise, perhaps it is time to take ownership. Every single decision consumers make plays into the possibility of averting this crisis.

We live in a world where the economy fluctuates based on the spending habits of the people. Since the Trump administration has shown little, if any, understanding of the severity of water scarcity and climate change, it is time to work together and make changes from the bottom up.

A single quarter-pound of beef contributes six and half pounds of greenhouse gases to the environment, according to PBS. Singularly that doesn’t sound like a lot, but it adds up to about 158 million tons of greenhouse gases per year. This is about the same as 34 coal-fired plants.

Changing one’s diet is one of the most directly impactful ways an individual can help avert the impacts of climate change.

And to make matters worse, this precious water is going to support a culture of wastefulness and diabetes. Sorry if this hurts anyone’s feelings, but being overweight is not a good thing.

It has nothing to do with aesthetics. Though situations vary, of course, being overweight is largely a reflection of a poor diet.

More than one-third of U.S adults are obese, according to the Centers for Disease Control and Prevention.

The estimated annual medical cost of obesity in the U.S was $147 billion. The medical costs for people who are obese were $1,429 higher than those of normal weight.

Vegan lifestyles emit 50 percent less CO2 than meat diets, use one-eleventh the amount of oil, one-thirteenth of the water, and use one-eighteenth of the land, according to PBS.

We can use one acre of land to grow 250 pounds of meat, or 25,000 pounds of plant-based food. New studies also show that a vegetarian diet could mean saving about $750 dollars a year.

In my humble opinion, making an effortless decision to change consumption habits will be far less stressful than navigating a world without water. As a consumer, the power lies in your wallet.