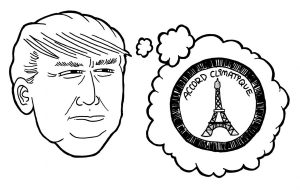 In a world of trouble, many feel that President Donald Trump will soon be facing the most defining decision of his young presidency.

The time has come for Trump to decide between staying in or withdrawing from the 2015 Paris Agreement.

A U.S. withdrawal would be nothing short of a ‘nuclear option’ that would erode American credibility and set back U.S interests on other issues requiring global cooperation, according to the Sierra Club, an environmental organization

Withdrawing from the agreement could create diplomatic blowback, while weakening American leadership in arenas far afield from energy and the environment, according to the New York Times.

The Paris Agreement was enacted in order to serve as a global framework to mitigate the impacts on climate change, specifically by reducing greenhouse gases.

The agreement laid out a timetable for participating countries to lower emissions, and a review process that would keep countries on track and even encourage more ambitious reductions.

A huge aspect of the agreement also called for developed countries, who are mostly responsible for climate change impacts, to provide financial climate aid to developing countries who would bear the brunt of impacts.

Another main aspect of the agreement is that over time, there would be a massive shift to renewable forms of energy. In other words, the Paris Agreement is a beacon of hope for all people who believe in that mystical thing called “science.”

There are growing doubts that the president will fulfill that pledge, according to the Times. The Washington Post’s headline reads: “Trump may be about to break another big promise.” The Atlantic’s head- line reads: “Is Donald Trump Keeping His promises?”

Yes, this was one of Trump’s core campaign promises.

His exact campaign promise was, “We’re going to cancel the Paris Climate Agreement and stop all payments of U.S. tax dollars to U.N. global warming programs,” according to Politifact, a political fact checking website.

This is not an election. Trump is already our president.

He is in the process of enacting real policies that will affect the entirety of our country and the world.

Instead of spending time speculating about the ways in which he might not be the man he claimed he was during his campaign, we should only be discussing what is actually at stake here, and try to work together to make optimized and sustainable decisions.

Instead of headlines like “Is Trump Breaking Another Promise?”, why don’t media outlets try a headline like “Is Trump Beginning to Reason With the Intellectual America?” or “Is Trump Developing a Prefrontal Cortex?” or perhaps “Trump Might Have a Conscious and a Soul After All.”

It is pretty much universally accepted that climate change is real and largely being caused by humans.

Even U.S. Secretary of State Rex Tillerson, former CEO of ExxonMobil, said that the agreement was “an effective framework for addressing the risks of change,” according to CNN. Needless to say, Tiller- son has some extremely right-wing views.

The media should strive to be more careful about inviting wise and cautious changes of heart instead of pointing out Trump’s flippancy.

He walked into the office with lots to learn, and it is natural that with more information, he has new opinions.

As a nation, let’s welcome positive growth and continue to stand up for the right decisions instead of wasting time talking about Trump’s campaign persona. Policy making is not a personality contest. We are not in a horse race. This is real life where policies are going to affect real people, and it is time to start discussing what matters.