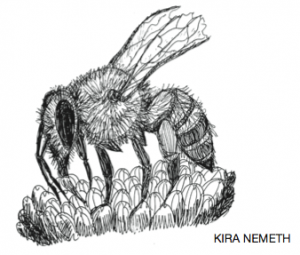 I think it’s about time we talk about the birds and the bees. Especially the bees.

Bees account for a third of everything we eat globally; 84 percent of the crops grown for human consumption, around 400 different types of plants, need bees and other insects to pollinate them, according to the Guardian.

Without bees, there would be a complete breakdown of the entire agricultural system as we know it.

Bees are considered “guardians of the food chain” because they pollinate plants that the majority of animals rely on for survival.

Without bees, supermarkets would have half the amount of food they have today, according to BBC.

With increased stressors on production, food prices will continually rise, which will make healthy food inaccessible for huge portions of the population.

A quote commonly attributed to Albert Einstein reads, “If the bees disappeared off the surface of the earth man would only have four years left to live.”

Though four years might be an inaccurate time frame, the logic behind this quote is rather alarming.

Forty percent of honeybee colonies in the U.S. are dying out each year, according to the Guardian.

Perhaps it is time we start paying attention to what the buzz is going on.

Why are the bees dying? You guessed it: human impact and climate change.

The “colony collapse disorder” knocked out a third of all honeybee colonies in the U.S in 2007.

Although there is still much research to be done, it seems that pesticides were one of the leading causes, according to the Guardian.

Pesticides and insecticides can either kill bees on the spot, or they will come into contact with it and bring it back to their colony with contaminated nectar on their bodies.

The Online Dictionary definition of monoculture is: “the cultivation of a single crop in a given area.”

When there is limited or no crop variety in a given space, unwanted pests and insects that target those crops can come in and feast. This leads to the vicious cycle of increased pesticide application.

Our current global rates of consumption call for over 1 billion pounds of pesticides in the Unites States each year and approximately 5.6 billion are used worldwide, according to the National Center for Biotechnology Information.

Against the advice of the Environmental Protection Agency’s chemical safety experts, EPA administrator Scott Pruitt rejects a decade-old petition asking to ban all use of the pesticide chlorpyrifos, according to an April 3 National Geographic article.

Climate change is also one of the leading causes of the bees’ demise. Trump’s massive EPA cuts and promises to revive the coal industry will only expedite and intensify the impacts.

However, the erratic weather patterns induced by climate change have caused changes in flowers’ blooming patterns, which confuses the bees.

Climate change has led to a disruption in the synchronization of flower opening and bee hibernation, according to The Guardian.

Since 1945, 97 percent of wildflower meadows in the UK are gone, according to the Guardian.

We are at a tipping point in time. The bees are not extinct yet, and there is still a chance to change our practices and sustain our future, both ecologically and economically.

This is a non-partisan issue. By promoting legislation that limits pesticide use and climate change mitigation, hope remains to rebound the honeybee population and avert this catastrophe.

We have to speak up now and spark a movement of change, or we will be facing some less than sweet realities.