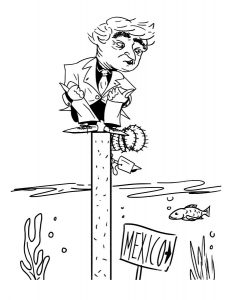 Hopefully that wall that Trump is building will double as a raft to save us from the perpetually rising sea levels induced by climate change.

Trump’s plan to revive the coal industry and cut back on environmental regulations will potentially be one of the most expensive and dangerous mistakes of all time.

An article by The Huffington Post warns that climate change will be the number one driver of war and displacement in the very scarily near future.

It is time to take partisanship out of the conversation
of climate change because evidence suggests that climate change impacts will be the costliest epidemic to date.

The Ohio Valley extreme weather and tornadoes of March and April 2013 cost $6.4 billion dollars. Climate scientists warn that extreme weather patterns will only increase in intensity and frequency if action is not taken to reduce carbon emissions according to Rolling Stone.

Trump’s statement to the Environmental Protection Agency was: “I am taking historic steps to lift restrictions on American energy, to reverse government intrusion and to cancel job-killing regulations,” according to AM New York.

I wonder if Americans will be screaming for government intrusion when Miami is underwater by the end of the century.

According to The New Yorker, Miami has already spent about a hundred million dollars on flood defense.

The Intergovernmental Panel on Climate Change predicts sea levels will rise by 52-98 cm by 2100, which threatens coastal cities and island nations, according to VICE media.

The projected sea level rise will cause most of New Orleans, along with Miami and New York City, to be submerged by the end of the century, according to VICE.

Going back to Trump’s statement regarding “job-killing regulations,” it should come as no surprise at this point that Trump is spreading false information.

American wind power created 88,000 jobs by the start of 2016, which is a 20 percent increase in a year, according to the American Wind Energy Association.

The fossil fuel industry is not. The cost of inaction is approximately $44 trillion by 2060, according to a CNBC article written in August 2015.

Trump wants to make America great again, and now it is time to show him how.

Standing up against Trump’s climate-change expediting policies has never been more important, and it is up

to both liberals and conservatives to speak out.

Climate change is not a partisan issue; it is a humankind issue. It’s time we do the math and face the facts or we will be in some deep water. Literally.