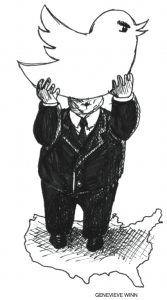 “This is a nation-wide soul search,” my father’s friend Dmitri said regarding the Syrian refugee crisis.

Dmitri is the son of Greek refugees, political asylum seekers, who fled Greece in hopes of a better life in America.

The question is, are we still a nation that opens our arms to refugees, or not.

However, aside from choosing between morality and economics, the larger issue at play is the spreading of misinformation.

President Donald Trump’s administration has been rightfully accused of playing off people’s fears and spreading misinformation about refugees, and citizens are forming opinions based on these lies.

Trump is using propaganda tactics to frame the refugees as terrorists, when this is simply not the case.

The Syrian refugee crisis was born out of a democratic uprising that began in 2012 to oppose the totalitarian Assad regime.

The Syrian regime responded with chemical weapons against its own people.

According to Mercy Corps, a U.S. global humanitarian aid agency, more than 11 million people have been killed or forced to flee their homes since the start of the uprisings.

Although the crisis is far more complex than that, it is unfair and unjust to paint the refugees as terrorists when in reality they are mostly civilians fleeing the hell that they are trapped inside of.

Of the 784,000 refugees resettled in the U.S since 9/11, a total of three have been charged with plotting terrorist acts, according to political news blog thinkprogress.org.

Trump falsely claimed that a group of Syrians were busted for trying to sneak through the border.

The exact tweet reads: “Eight Syrians were just caught on the southern border trying to get into the U.S. ISIS may- be? I told you so. WE NEED A BIG & BEAUTIFUL WALL.”

This is simply untrue.

“Two asylum-seeking families, including four children, ‘presented themselves’ at the border and were detained… government officials confirmed there was no evidence of any connection to terrorism,” according to the Huffington Post.

Trump is making it seem as if we have no control over our borders, and the situation is entirely unmanageable.

At an inauguration speech in June, Trump stated: “We have to stop the tremendous flow of Syrian refugees into the United States — we don’t know who they are, they have no documentation, and we don’t know what they’re planning.”

This is false. Of all the ways to enter the U.S., the vetting process for Syrian refugees is probably the lengthiest and most time consuming.

The process typically takes up to 18-24 months, and involves multiple federal intelligence and security agencies, and refugees also don’t have

a choice as to which country they are resettled in. To say that they have no documentation is just wrong.

Trump’s administration also attempted to heighten the country’s fear levels by releasing a list of 78 terror-related attacks, and accusing the media of underreporting these attacks.

However, “Many of the attacks cited, such as the attack of the Orlando night club shooting last June and 2015 attacks in San Bernardino, Calif. and Paris, were extensively covered by the media around the clock,” according to a Feb. 6 NPR article.

As a Jewish girl, I have learned all too well what propaganda was capable of doing in Germany.

I am in America because my immigrant ancestors sought a better life.

Although I am not positing that there is a one shot simple solution to our stance on the refugee crisis, I do think that it is a humanitarian travesty to turn a blind eye to blatant propaganda in the United States of America.

We are living in the Age of Information trapped inside a nation of misinformation, and it’s time to break the cycle.