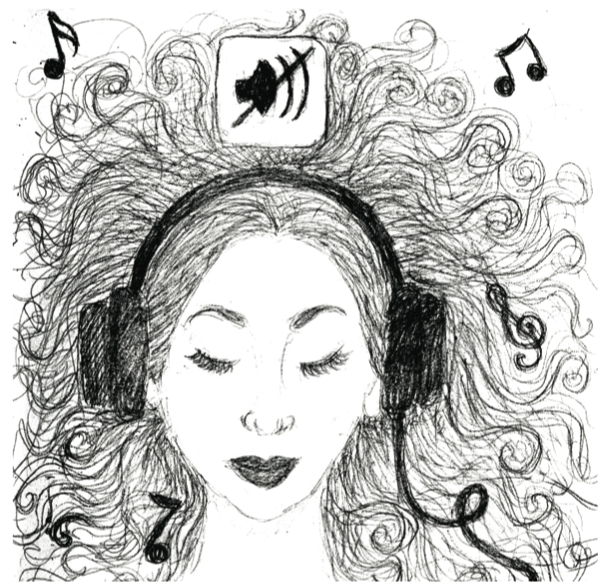 It’s no wonder millennials are so uninformed. We can’t hear a damn thing.

Doctors warn that the access to loud music through earphones will lead to a generation with hearing loss.

One billion young people are at risk of hearing loss because of personal audio devices and damaging levels of sound at entertainment venues like electronic dance music festivals, where noise levels can top 120 decibels for hours, according to the World Health Organization.

One in five teens have some form of hearing loss, which is up by 30 percent since the 90’s, according to the American Osteopathic Associ- ation.

Next to HTML and Chinese, perhaps sign language will be the next most important language to learn.

So the question is, how loud is too loud?

The answer is simple. Basically, if you can’t hear noise around you, turn the volume down. You’re jamming too hard. If you are drowning out the sounds around you, that means you are playing your device almost at the same decibel level of an EDM concert (120 decibels). Damage also coincides with duration (duh). The longer the loud, the less you’ll hear.

The worst part is that hearing loss from loud noise is irreversible.

Think of your ear like a tissue box. Every time you take a tissue out of the box, you are one step closer to having an empty box and a dripping nose. To make a long story short, there are hair cells in your inner ear, and attached to these cells are stereocilia, or hairs that stick out.

The bending of these hairs are responsible for triggering the reaction that tells your brain to hear. However, if these hairs are bent too far from loud noises, they die or are permanently damaged, and they can never regenerate.

Once you start noticing signs of hearing loss, there is nothing that can be done, aside from wearing hearing aids. Preventative action is key.

The top signs of hearing loss are ringing in one’s ears, perceiving others to be mumbling, asking people to repeat themselves, speaking loudly without intending to, or having difficulty talking on the telephone.

Symptoms may also include tolerating country music, thinking President Donald Trump knew anything about politics after listening to him during the debates and watching more than 10 minutes of “The Bachelor” without realizing that it is unwatchable.

Hearing loss is gradual, and individuals often do not notice for a long time.

William Shakespeare put it best in “Romeo and Juliet.”

“The sweetest honey is loathsome in its own deliciousness. And in the taste destroys the appetite. Therefore, love moderately.”

Just do less. You heard it here first. Or did you?