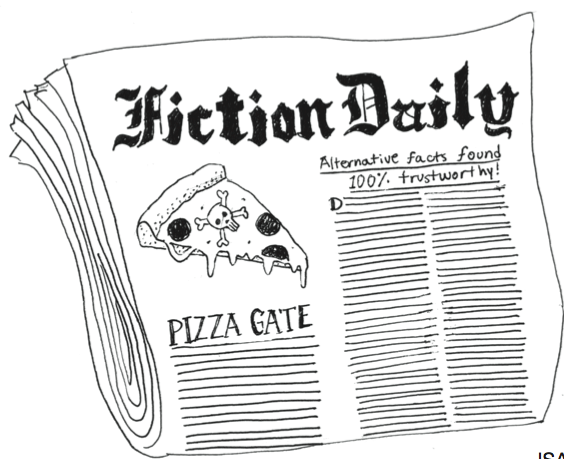 By Lily Spechler, the Vermont Cynic

With the velocity of information perpetually on the rise, it’s impossible to slow down long enough to discern fact from fiction.

Fake news is the intentional spread of misinformation, and though the news might be fake, the repercussions are very real.

For example, a Dec. 20 article published by AWDNews mistakenly quoted former Israeli Defense Minister Moshe Yaalon as threatening to destroy Pakistan with a nuclear attack if it sent troops into Syria.

This fake-news story led to a terrifying response by Pakistan’s Defense Minister Khawaja Asif, who assumed the news story was real.

And who could forget the “Pizzagate” scandal, which claimed Hillary Clinton was operating a child-sex trafficking ring in a pizzeria and led to an attack by infuriated Edgar Maddison Welch using AR-15 assault rifle.

Welch was attempting to investigate the truth for himself, but authorities did not necessarily agree with his forensic tactic, to say the least.

Although no one was injured by Welch, I can’t say the same for the poor, poor victims of the “Bowling Green Massacre”. Oh wait—Kellyanne Conway made that story up on live television, according to Politifact, a fact checking website.

I believe there is a difference between fake news and propaganda, but unfortunately propaganda is occurring in the U.S. at the same time as fake news, and no one knows who to believe.

This is especially problematic since our president is doing everything in his power to discredit the media and paint himself to be the only credible source.

On Feb. 7 President Trump mistakenly reported that the crime rate is the highest it has been in 47 years in order to promote his immigration and deportation policies.

Although there was a slight spike between the years 2014 and 2015, Trump’s statement was a blatant lie.

In fact, the number of number of murders declined by 42 percent between 1993 and 2014, according to Politifact.

It is hard to prove whether or not Trump is lying intentionally, but the fact that his statements are false is indisputable. Not only are Trump’s statements untrue, he is using those falsities as the basis for very real policies.

The scariest part of all of this is the spread of misinformation is about to get a whole lot scarier.

According to a research paper published June 2016 by professors from Stanford University and the University of Erlangen-Nuremberg, technologists are capable of controlling someone’s facial expressions on camera in live time.

For facial re-enactment to work, there must be a “source actor” who is controlling the facial expressions of a “target actor.”

I highly recommend watching the YouTube demonstration to fully understand how easy it is to be fooled by this technology.

Simply type in “Face2Face: Real-time Face Capture and Reenactment of RGB Videos,” and prepare for your mind to be blown.

What happens when live speeches are hacked?

Vanity Fair pointed out a potential scenario in which a political group creates a fake video of Trump saying he is going to drop a nuclear bomb on China. The velocity of news contagion would mean that the Trump administration would have very little time to prove that the video was fake and avert an international crisis.

If we’re getting duped by both print and video media sources, how will we filter out the truth?

There is reason to be alarmed here, and I hope that you don’t find this media warning too ironic to take seriously.