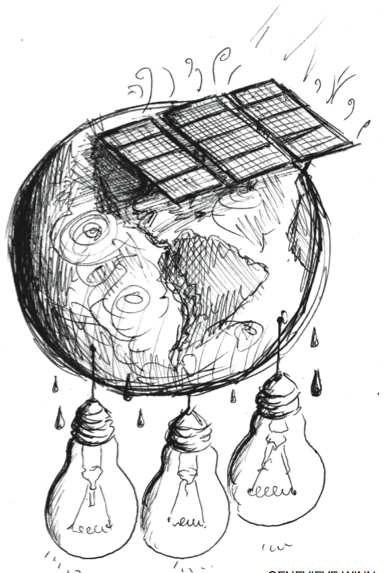 By Lily Spechler, the Vermont Cynic

AC/DC, the world famous Australian rock band, had it right when they said we were on the highway to hell.

AC/DC stands for “alternating current” and “direct current,” and represents the “War of Currents” that took place in the late 1880s.

Thanks to the biases of modern day textbooks, U.S. citizens are fed a shortsighted perspective in school that serves as the basis for understanding history at a young age.

Students are given blinders and told to accept that Christopher Columbus was a noble hero.

In the U.S., agriculture is responsible for 80 percent of the nation’s water use, according to the U.S. Department of Agriculture.

I wonder if this number would be lower if we decided to take after the practices of the Native Americans rather than attempting to erase their culture from existence.

We are told to accept the U.S. as an economic world power, and fail to reiterate that we kickstarted our economy by relying on the free labor of slaves.

While everyone knows the story of Thomas Edison, the part that was left out of textbooks is that Thomas Edison had a very close rival named Nikola Tesla.

Edison hired Tesla as part of his company, Continental Edison Company, in 1882. Shortly afterward, the two went head-to-head with their competing ideologies, a battle later known as the War of the Currents.

Thomas Edison’s model used “direct current” to transmit energy to the people, which was one-directional, low voltage and safe.

Nikola Tesla fathered “alternating current” which meant that the electrical current could switch directions, and was the riskier of the two because of the higher voltage.

AC was, in fact, the ultimate victor, because DC was less capable of traveling long distances, but Edison got all the fame.

The question is, why didn’t Tesla make it into any of the history textbooks?

According to a video created by energy.gov, Edison was truly a businessman at heart. His goal was to monetize every part of the process and privatize electricity.

This juxtaposed Tesla’s ideology, which fought to provide free electricity and information for all. Edison felt threatened by Tesla, and launched a propaganda campaign to delegitimize him.

According to History, the cable and satellite television channel, the campaign involved publicly electrocuting large animals to show that the current was dangerous.

“By failing to include both opposing stories, the student reader is forced to understand and interpret a one-sided view of the history of electricity,” senior Nicole Kim said.

I believe that over time Tesla’s name faded out of the textbooks because his ideology did not align with the U.S.’ long-standing goal of having a perpetually increasing economy. But this is a goal that must be broken down and revised.

We are living in the Anthropocene, a geological age where human activity has disrupted the earth so much that the planet can no longer function according to its natural rhythms.

According to MSNBC, if everyone in the world lived the way we live in the U.S., it would take five earths to sustain us. 2014 was the hottest year on record, and scientists predict that temperatures will continue only to rise.

It is time to take the leap to renewables and rewrite our history.

According to CleanTechnica, the popular news site for clear technology news and commentary, “in a single year, the sun delivers about twice as much energy as we have ever gotten (or will ever get) out of a nonrenewable energy source.”

Tesla, Inc. is an American automaker, energy storage company and solar panel manufacturer that is absolutely revolutionizing the world.

According to Business Insider, Tesla was named after Nikola Tesla, the mastermind behind the AC induction motor; the company shapes their motor after Tesla’s invention, and seeks to emulate Nikola Tesla’s risky, efficient and anti-capitalist spirit.

In an interview with Wired on October 21st, 2012 Elon Musk, CEO of Tesla Motors, weighed in on the concept of risk.

“There’s a tremendous bias against taking risks. Everyone is trying to optimize their ass-covering,” he said.

Albert Einstein got it right when he famously said, “The definition of insanity is doing the same thing over and over again, but expecting different results.”

By continuing to deliver a one-sided version of history in textbooks, we are only perpetuating the outcome of a wasteful and unsustainable society.

It is time to overcome the biases we have against risk and anti-capitalist motives and start to incorporate new perspectives on our past in order to foster a transcendental future.